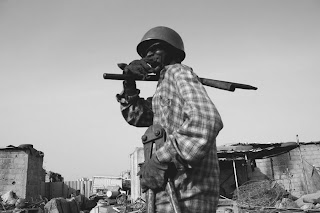 HE IS A SOLDIER –CHUKWUEMEKA ODIMEGU OJUKWU (PART 2)
Of a refined personality, accused by most to be autocratic and a totalitarian in character and views. But, that inherently is the firmness and stoic control of foresighted leadership, whose perceptions may not tally with the majority. Moses in the Bible did not fare better, like all the path and fate of forerunners in history. This stoic and astute stands would have gradually given way to a more conducive working principle which in its effect would have aided and compelled the growth of all the multi faceted potentials of the people. You have to cross the river first, to lay the catch. Ojukwu’s story has not been told!
Biafra is a language with a living core. Neither did it evolve from a mere chance in trifling mixture of syntaxes, words and synonyms, but of a definitive stage of evolution-yes! there is a state called Biafra. This could readily be sensed by the meaning and the sound of the word itself. BIA- in the language of the people is a gesture of togetherness, of union, hence its meaning, ‘come’. The –Fra at the end will somewhat not sound familiar to popular ear, as the language over a period has also been distorted and eroded. Just like the Yoruba use of the word Meta, meaning three, which as a universally fully formed word and symbols means same THREE, whose meaning science and scientist alike, have used as a recognition of the effects of its formula, like the coinage Meta-physics, and all the rest applications whose effect have been raised to power three. The word-FRA is also a fully evolved connotation, meaning a coming together, to Fra-ternize, as the modern culture understands its usage .The language BIA-FRA, simply indicates a union, a coming together of all potentials in active working force.
A true understanding of the essential nature of the people! No wonder you will always find Biafrans in groups doing same business along same stretch and each successfully thriving well. This simply comes from an understanding of this intrinsic qualities and its application, the law of attraction of sameness and the union of energies. Ojukwu’s story has not been told!
Biafra represents a new consciousness, an awakening. No doubt the colors, the symbol and the name of the flag- The Rising Sun. The color of the flag by composition shows the nature and quality of the people. Of aggressive animating nature, a spark in darkness. Of a melancholia, but imbued with light which finally dawns on a green epoch, the awakening of potentials. Will it ever be said that this awakening was forcefully suppressed? The Ojukwu’s story has not YET been told!
Posted by charles okereke at 3:48 AM