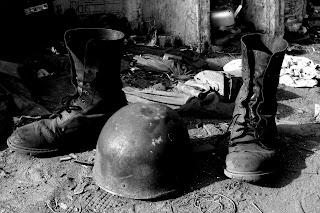 HE IS A SOLDIER- CHUKWUEMEKA ODIMEGU OJUKWU. (PART 1)
I was born in 1966 in present kano state, at the height of the genocide which eventually escalated to war, between the Nigerian State and an emerged sovereign State called Biafra in 1967, so I could as well call myself a war child.
I grew up to hear war tales from my mother and friends, of escapes and failures. I heard Ojukwu’s name as a song, which I also learnt to sing. I knew and had friends as a child with amputees’ soldiers and civilians alike. You cannot escape this tales and experiences, if you were born of my generation and period of said event, and they impressed themselves somewhere locked in chambers of my subconscious.
Events bring unfolding and by experience perception widens. The Ojukwu story has not been told!
Foresight and perceptions could be clouded if genuineness of intentions is not the objective, leading to strife and conflicts. A great soldier has passed on, bowed to recognition of a greater law which stands infallible. He had a vision which was not shared nor understood by his contemporaries, he was light years ahead of his peers, he recognized the spirit of the people and the possibility of expansion and propagation if empowered with sovereignty, this could easily be attested today by all who submits to the truth, of the immense potentials of the Biafra State, even at present. Ojukwu’s story has not been told!
Like the Ostrich, we have grown and adapted strategies to hide our heads in the sand, and pretend that it is not happening, and yet the pressure builds, and again we suppressed it. We have grown to become a nation which impoverishes itself, stifled the potentials of its citizenry, and sweep it under the carpet with pompous words or with brutal force. The Ojukwu’s story has not been told!
A fine soldier, he stood his ground in his convictions. He believed in his perceptions, amidst malicious spites from the narrowed minded crowd. And yet the retroactive effects of his suppressed and misunderstood concepts is speedily evidencing itself in strife and turmoil all over the nation, yet again we pretend it is not happening, it will resolve itself the usual style. Like all concealed pressure, which is constantly reinforced, finally will come a breaking point, if the actual laws of evolution are not respected and implemented.
There may be posers which suggest to, how conscious were the Biafra course genuinely articulated and presented, and I dare say. I have lived to see my nation wither every day, of potentials without hope to express their worth. I have seen my nation deliberately paralyzed its people by denying them electricity, a constant energy, which common knowledge prescribes as the animating factor in any vibrant culture. I have lived to see the collapse of the educational sector in my country, like a systematic disparaging, we have been gagged, stripped naked and made ignorant fools, in the midst of plenty. I have seen the youth with no direction and hopelessness. I have seen were corruption is now a culture extol as a quality of nobility and power, a bloody terrain of the most brutal henchmen from dark regions. Is it not self evident that the ideals and courses so chosen, might be wrong after all? as the downward trend continues. History vindicates great men in time. The Ojukwu’s story has not YET been told!.
Posted by charles okereke at 3:38 AM